I didn’t grow up near the ocean, but I did grow up on a lake.  Lake Pontchatrain is a small, murky body of water nestled just north of New Orleans.  It is the body of water that separates my home town of Slidell from the Big Easy. I grew up in an apartment on a peninsula, which had a canal on one side, and Lake Pontchatrain on the other.  I literally grew up surrounded by water. The canal side had alligators and perch, and every property had a small fishing pier on the lake side. Although I grew up in a “sportsman’s paradise” and a fishing and hunting mecca, I could give two shits about either one. My interests lied in swimming, the lake, and the pool. My favorite thing to do was swim from one pier to another and back, either as fast as I could or underwater holding my breath for as long as possible.  Having an extremely competitive father only encouraged these activities.

Beyond the lake, there was an athletic center where I swam competitively from the age of four until middle school.  My parents mirrored each other in their enthusiasm for my competitive swimming, although my mother was the one who drove me to swim meets, practices, and clinics, waiting around for my next heat. If you’ve never been to a swim meet, it’s an all-day affair.  Thank your mom if you were a swimmer. They didn’t have cell phones back then, but they did have magazines.

We didn’t have lots of money, but our neighbors did, and in their boathouse on the canal side sat a 45-foot fishing yacht (It was a yacht to me).  I can clearly remember one summer day, jumping in the lake by myself, taking three deep breaths, and swimming as hard as I could sub surface to my neighbor’s pier. When I came up, I was completely under his pier. That day, my neighbor and his sons were fishing.   I swam out from under the pier and carefully between the fishing lines.

“Where the hell did you just come from?” Mr. Ted yelled down to me.

“Under your pier. I swam underwater from over there.” I pointed to my pier. What I didn’t know at the time was that I had just gained a sweet summer job and my first experience doing freelance underwater ships husbandry work.

My dad was contacted by my neighbor.  A few days later I was on that boat heading out to the middle of Lake Pontchatrain.

“You’re gonna clean out my bilges with this screwdriver.  I have a scuba mask that should fit you.”  That was my job brief.  I had no safety line attached, no knife, and no one else besides myself and an extremely overweight, out of shape older man as my safety swimmer. There was no O2, a stretcher, or even a harness worn, but when you’re 10 years old, none of that matters. I left surface and found a tiny grate caked with seaweed and algae.  I think it took me about three trips on both port and starboard, but I got it done.  He only paid me $50.00 and a delicious McDonald’s lunch, but I couldn’t have been happier. We did this twice a year and when the yacht was sold, I was genuinely saddened because it was literally one of my favorite summer time activities. I never knew that 18 years later, I would be doing essentially the same job on giant ships as a vocation. 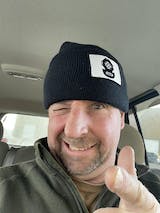